How can banks maintain a competitive advantage?

This blog has originally been published at Holland Fintech.

Bank are trying to follow suit with large innovation departments, new ‘fintech strategies’ and a change in culture, including the start-up attire of a t-shirt and sneakers. But despite their sheer size and efforts, most banks seem to struggle.

We can compare the battle between banks and start-ups with the story of David and Goliath from the Old Testament. Goliath was a strong man, with full body armour, a spear and a sword. Seemingly no one could conquer this giant. Then there was David, a small shepherd boy without any protection. Assuming a traditional single close combat, no one would expect David to stand any chance.

However, David did not honour the traditional rules of warfare. By engaging in a different type of battle, he turned Goliath’s strength into his weakness. Goliath was a large and strong man, but his heavy armour made him slow and he had poor eyesight. David was not so strong nor well protected, but his lack of armour made him fast. More importantly, David was a skilled slinger. David ran up to Goliath, took a stone out of his bag, and slung it onto the forehead of Goliath. Thereby the underdog was able to win the battle. [source: David and Goliath, by Malcolm Gladwell]

The underlying principle is competitive advantage. This is a set of conditions that best suit a company’s characteristics and make it most efficient relative to others. By creating your own rules, or in business term your own market, you can alter the circumstances to best suit your characteristics.

Competitive advantage can be based around a variety of things including a product suite, customer segment, capabilities or themes. This principle holds not only in case of competition but also, or especially, in case of a partnership between companies.

I certainly believe banks should respond by raising the bar, and continue their efforts to be more efficient and customer friendly. Due to technological advances and better services offered by tech companies, customers nowadays simply do have higher expectations on banking.

However, banks should have a good understanding of their competitive advantage, to stay close to their home environment that best leverages their characteristics. What makes the incumbent bank different from start-ups?

First of all, the fact that fintech start-ups typically target one specific niche is the very point that sets banks apart. Banks are typically one-stop shops for people’s finances, offering a large variety of products and services. Banks are typically also the first contact point for people’s finances and still enjoy a high level of trust when it comes to financial services. They could leverage its primary customer relationship to become the spin in the web, for example through partnerships with alternative lending providers.

Second, most banks have large physical distribution networks. This offers customers a multi-channel customer experience with the option to walk into a branch and talk to an advisor – something that is still valued by large segments of the population. Plus, these branches enhance the branding of the bank. This allows banks to distinguish themselves in the digital world, with a more human, personal touch.

Third, in contrast to start-ups that must build a new company from scratch, banks have large existing organisations, with many customers and existing business that provide diverse sources of income. Due to the low churn rates, banks are likely to maintain their foundation in the foreseeable future. This gives banks a strong platform to experiment with a variety of initiatives to diversify their business risk.

There are many other unique characteristics of bank, for example banks have large balance sheets, strong risk management functions and regulatory compliance in place with extensive KYC.

While these characteristics are generic to all banks, every company is unique and has its own competitive advantage. Ask yourself what sets you apart from the rest. Why are customers choosing you? In which areas do you perform better than the benchmark? Then, instead of following the ‘rules of others,’ you can create your own ‘rules’, to position yourself in the market to best leverage your characteristics.

The Digital Banking Opportunity in Africa

With the on average youngest population in the world and a rising mobile economy, Africa is becoming an attractive market for new entrants aiming to offers digital banking services to the largely underbanked population. In this blog based on our collaborative research together with BPC, we are looking into the market environment of Sub-Saharan Africa and the state of digital banks within the region. Read more

Based on our longstanding experience within banking and supporting clients in establishing new organizations, this blog post aims to help you to align your organization to deliver a superior end-to-end customer experience by discussing the key differences in the organizational design of a traditional incumbent bank compared to a modern challenger. Read more

How to design the operating model of a digital bank

Operating models are an integral part of every bank’s business and if not properly designed, a bank can suffer critical consequences such as high operational cost, increased time-to-market cycles, elevated compliance risk and slowed decision making. In this blog article, we want to help you better understand how to avoid these pitfalls and show what it takes to design a comprehensive and successful operating model. Read more

IT architecture of a digital bank

Traditionally, banking IT architecture was designed from a product perspective resulting in a product-oriented service approach. However, to be able to deliver a superior customer experience, digital banks ought to take a client-centric approach in designing their IT architecture. In this article, we dive deeper into the technological building blocks of a digital bank and provide you with some of our best practices when designing the IT architecture of your bank. Read more

How to choose the right IT Vendor for your digital bank

IT Vendors and digital solution providers have experienced a growing spur during Covid-19 bringing with them various options and driving countless new banking technology solutions. Along with the growing number of IT providers, banks now have a large pool of solutions to choose from. However, making the right choices is crucial and can ultimately determine the success or failure of the organization. Based on our experience, we have put together the major steps to take when choosing an IT Vendor for your digital bank. Read more

Applying for a financial services license

Applying for a financial license marks a significant time and monetary investment with a certain risk factor not to be successful. However, by being well prepared and following a structured and targeted process, you can drastically improve the chances and efficiency of a successful license application independent of which type of banking or fintech license you are applying for. In today's blog, we therefore present 5 essential steps and key success factors to take in mind when applying for a financial serviceslicense. Read more

How to choose the right regulatory regime for your bank

Financial services are heavily regulated and before being able to provide such, one typically needs a regulatory license in some form. Licenses differ in their scope of permitted activities and requirements on the organization. Additionally, regulatory frameworks also vary across jurisdictions and types of financial services provided. This blog post aims to provide an overview of existing licensing regimes across the world and help new digital banks in making the right choices. Read more

The Latin American region is currently undergoing one of the largest digital transformations in the world. It continues to stabilise a high level of digital adoption, while also ensuring financial inclusion to the unbanked population. This report investigates the current digital banking landscape of the region, summarizes propositions and strategies of various selected players and provides a list of carefully assessed action points and imperatives to enter the market and establish your digital bank. Read more

While it is debatable in what country buy now, pay later first began, the rapid expansion across the globe has allowed for new types of consumer financing solutions to evolve quickly. New entrants seemingly launch weekly, and product and geographic extensions from existing players just as commonly. Together with Jason Mikula from Fintech Business Weekly, we have created a global industry primer discussing the in and outs of BNPL. Read more

In the last 5 years, we’ve seen the number of digital banks grow at a terrific speed. Their modernized services, unrelenting approach to customer-centricity, and innovative tech stack have taken the banking industry by storm, encouraging the entire industry to rethink how financial services are done. We put together four of the main lessons incumbents can learn from the new digital banks. Read more

We have entered a digital era where the pace of technological innovation seems to have become the main driver of change. The current environment forces banks to transform into a flexible, agile organisation, capable of quickly adopting to market developments. How then can banks successfully engage in a digital transformation? In this blog we describe the four steps to follow for a successful digital banking transformation. Read more

While digital-native challenger banks are increasingly maturing and bigtechs are expanding rapidly into financial services, traditional banks face the risk of slow but steady deterioration of their financial performance. However, with the right strategy, now it is the perfect moment for mid-sized banks to become leaders instead of laggers. Read more

Performance of neo banks in times of COVID-19

In recent years, we have witnessed the steady rise of digital challenger banks, also referred to as neo banks. It seemed that the only way was up, but COVID-19 halted the growth. We analysed neo-banks’ performance using our Fincog Challenger Bank Index, across various categories, regions and even for individual neo banks. Read more

The Netherlands has a well-functioning banking market, with one of the lowest cost of banking services, good quality of service, and low defaults on lending. However, there are still some interesting opportunities in specific niches. This article provides an overview of the Dutch banking market and explores potential opportunities for financial service providers. Read more

Online ecosystems like Amazon, Google, Facebook, eBay, Alibaba, and GO-JEK bring people together to contribute, interact, buy, sell and more. They’ve already irreversibly changed the retail landscape. Now, by introducing financial products like payments and consumer credit, they are jeopardising the position of banks. What can banks do to secure their future position? Read more

How Neobanks Are Setting the Benchmark in Banking

Over the past years we have witnessed a steady rise of challenger banks, or neobanks, in Europe. These newly established retail- and SME banks are competing with (or ‘challenging’) the established banks with modern banking propositions tailored to the digital world. Read more

Investing in fintech remains popular, with much investment activity and an overall higher valuation of organisations within the field. Who, then, are the investors in fintech, what do they invest in and what is their investment rationale? Read more

Why it's quiet on the PSD2 front

Over the last months we have helped a large universal bank to explore potential new opportunities under PSD2. In this blog we argue that PSD2 has set a long-term change in the market, and share four type of use cases we have identified by using a customer journey map. Read more

What is the future of banks in the PSD2 era

What may be the future of banks under PSD2? How might banks adapt to PSD2? In this blog we share our ideas Read more

How can banks turn their competitive advantage into strategy?

New fintech companies are born every day, and can offer many services more efficiently than banks. How should banks respond? Read more

Send us a message

We usually reply within one business day

Stay close to our developments and subscribe to our monthly newsletter 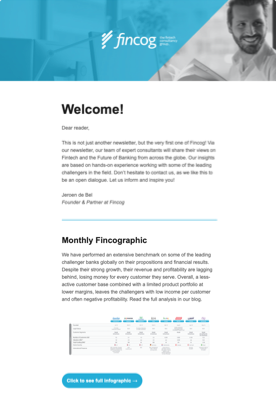 Stay close to our developments and subscribe to our monthly newsletter